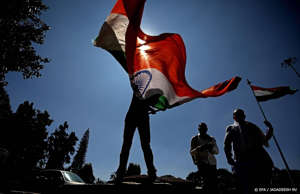 NEW DELHI (AP/Bloomberg) – India wants to become less dependent on energy imports from abroad. According to Prime Minister Narendra Modi, the Asian country, which is currently the largest energy consumer in the world after China and the United States, should be completely self-reliant in terms of energy in 25 years when it celebrates its 100th Independence Day.

The Prime Minister said this on Sunday as India celebrates its 75th independence from the United Kingdom. To realize this ambition, Modi wants to make India a global green hydrogen hub. India’s extensive railways should be CO2 neutral by 2030.

Modi wants to focus more on electric transportation. He announced that he aims to invest 100 trillion rupees, or more than 1,100 billion euros, in infrastructure. This would help reduce travel times and enhance the competitiveness of the Indian economy. According to the prime minister, the money will stimulate economic growth and there should be more jobs.

Given climate change, Modi’s government is encouraging Indian companies to move away from fossil fuels and switch to renewable energy, such as green energy generated by wind turbines or solar parks. The government plans to nearly quadruple its renewable energy capacity in the lead-up to 2030 to meet climate targets.

Brazilians will choose between two evils: you have to know this | Currently