On this page, the latest figures on the covid-19 epidemic are presented daily, based on NICE data, supplemented by predictions for the coming weeks. Today numbers December 28, 2021.

Now we’ve come to the eye of the storm: the delta numbers have dropped dramatically and the Omikron wave has begun to swell under the skin. This will basically show up at a big peak if we look at the number of positive tests we can expect. Our forecast is based on numbers from Gauteng which we update almost daily.

The number of true infections could theoretically be as high as half a million at the top of the PCR curve, but that number will never be seen. Primarily, because only a small portion of those infected are always tested. Since fewer people will receive complaints, this share will be much smaller in Omikron. A first conservative estimate is that it could be 35,000.

But a few weeks ago, even before the lockdown was declared upon us, we can see from the numbers from South Africa that the burden of disease was much lower there, just 10 times as much.

The media reported for several days that Omikron may be dominant in the new year. Before yesterday, it was reported that the share could now reach 75%. Let’s help everyone get out of the dream, the share in our models yesterday is 79%, so we’re only smiling from a report from RIVM at 75%: We’re still in the middle of a bull’s-eye! The fact that it has not yet been observed in hospitals may be due to the fact that Omikron has spread mainly among young groups. However, if positive tests begin to rise sharply, this must also be due to the elderly, after which it will become clear to what extent this leads to a less serious disease. (the danger is, As Morris explained today, The increase in hospitalizations will mainly come from those admitted for Covid-19. In this case, it should be clear from the IC recordings that Omikron makes much less sickness).

According to preliminary calculations, the number of patients with Omikron will prevail in the first week of January. Whether we also see an increase in the total number of registrations will be exciting for some time. The initial speculation is that we’re really about to see that increase, but we’re not sure.

But we are far from meeting RIVM’s prediction that as many as 5,000 patients may end up in the intensive care unit. There are now 535 and it is still declining. Only if Omikron is more sickening than we now think based on the first indications from Europe, this number of IC acceptances could surpass last month’s high (675). So maybe the storm was only in a cup.

The graph shown by Van Dissel to demonstrate the necessity of closure suggested a 60% reduction in the number of IC beds compared to the situation with only mild closure.

We don’t see any skew in our charts that could result from this. Now it will be said thatWithout this lock…..“.But if you put the Belgian numbers next to it, you won’t see a difference. Without a lockdown there, the Belgian numbers go down faster. So it is expected that lifting the lockdown measures will not make clear differences.

Remarkably, according to Van Dissel, slowing infection not only slows the epidemic (ie, fewer hospitalizations), but also makes the epidemic end sooner, so that fewer people gain immunity. Slowing down the epidemic means it will last longer, and the picture from RIVM shows just the opposite. This is a strange thought to explain this cycle.

So much written, nothing to show yet. Here are the charts, as expected, peak dullness. The only pull is when the creases are visible. We see almost nothing in the admission numbers:

However, it now appears that PCR has hit rock bottom, just as expected. Yesterday’s numbers are still unknown. We won’t wait for them, they also look incomplete due to computer malfunctions, plus Christmas also resulted in fewer tests being taken. 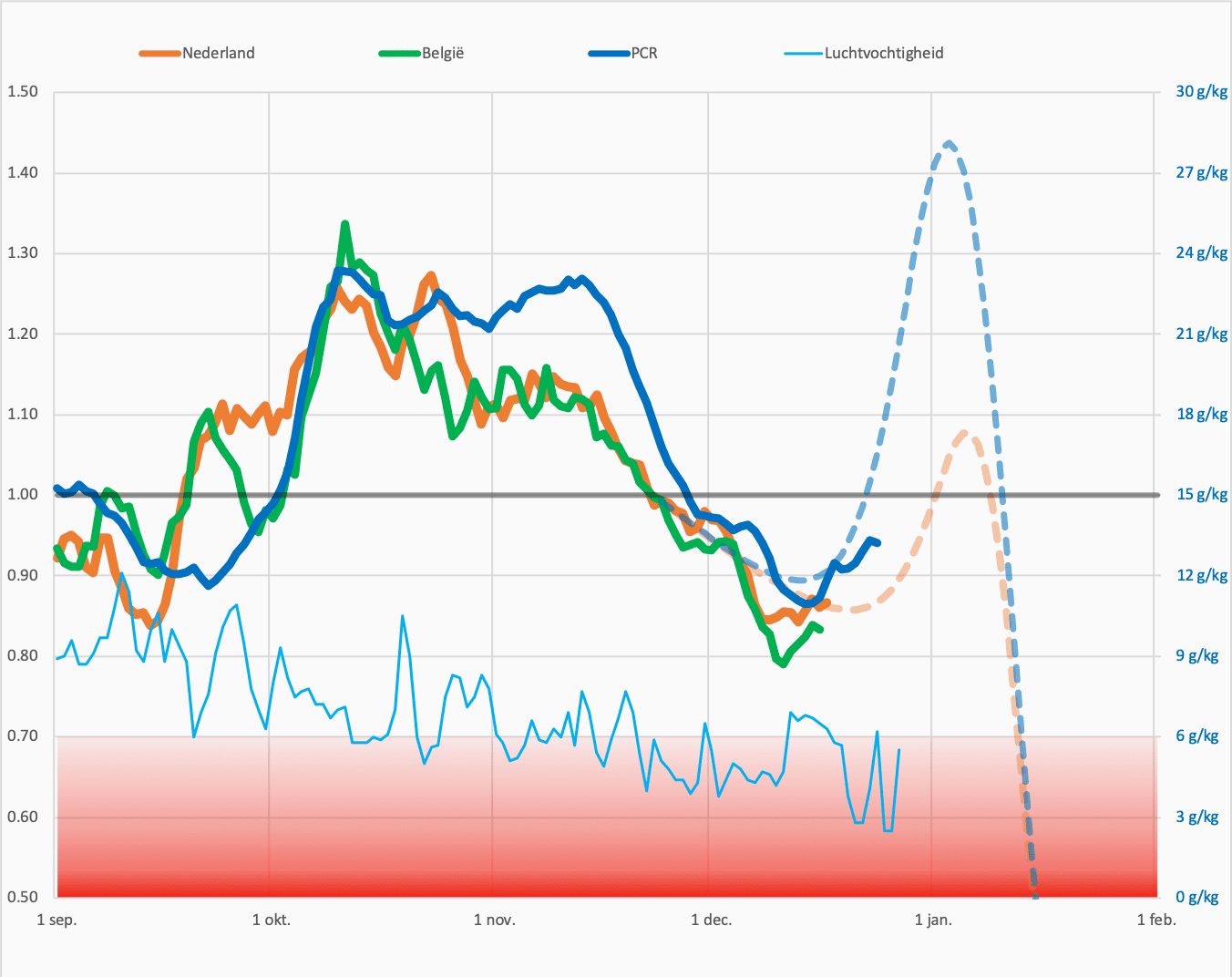 The R-value graph shows a lot of interesting details. What is striking is that, when computed on the basis of the PCR value, it appears to follow the prognosis closely, perhaps with a slight delay in time. On the other hand, the value of R based on the number of shots has little advantage. There can be all kinds of explanations for that. We will only adjust the prognosis once we have a better idea of ​​which variables are responsible. The shorter incubation time of Omikron plays a role, but so does the disease burden value.

In addition, we also see the R-value from Belgium. On the day the lockdown began in the Netherlands, we see the Belgian numbers drop further, while the numbers in the Netherlands have been up for some time. Not much, but the RIVM’s prediction that we’re going to give the pandemic a big hit should have given a very different picture: halving the value of R in the past few days.

The daily numbers for hospital admissions are:

In the hospital admission graph, the blue line marked “I-PCR” represents the prediction of the number of admissions to hospital based on the PCR test. see also Our blog is about it.

* revision Value. Uncorrected values ​​in stichting-nice.nl
**Note: This R value today could still change by 0.02 in the near future, as a result of addition (add NICE for patients with a positive PCR test not yet entered).

Blind people will read the graphs with their fingers

130,000 Amsterdam residents were invited to conduct research on lung cancer