FIFA wants to organize a world championship every two years. This will result in an additional €4 billion. In Europe they don’t like the plan at all. “Another World Cup is dismantling the sport.”

The idea comes from Saudi Arabia. Last May, that country presented a plan not to hold the World Cup every four, but every two years.

FIFA immediately investigated and presented the results this week. Conclusion: Every two years, the FIFA World Cup provides nearly 4 billion euros in additional income, almost double. Most of this money can be transferred through the powerful federation to countries where they can promote football. The tournament should be held every two years for both men and women.

It creates a gap in the world of international football. Football associations are excited in Asia, Africa and North America. Now countries in those regions have to wait four years to see their team play against players of the level of Mbappe, Messi or Frenkie de Jong.

They think it can be done more often. Small soccer nations that rarely participate in a final tournament can count on millions more in soccer subsidies each year. So go ahead, is their response.

But the traditional football continents do not like it at all. Last week, UEFA published a study that showed European football federations raise 2.5-3 billion euros every four years, less if there is a World Cup twice as often.

According to a UEFA investigation, broadcasting rights and sponsorship deals will come under pressure.

More money but for what?

The World Cup will also be expanded from 32 countries to 48 countries in the final tournament from 2026. This means more matches in the World Cup, for which FIFA collects receipts.

According to the KNVB, the ultimate goal of FIFA, which is to help poorer football nations, was not met with him. Gijs de Jong, KNVB General Secretary: “This does not allow football to grow in the rest of the world. While we lose in Europe with it.”

Only coach and former player Arsene Wenger has been appointed by FIFA to promote the World Cup every two years. The Frenchman said in the presentation this week that FIFA. “Young people want more prestigious football leagues or else they will go to other sports.”

According to FIFA President Gianni Infantino, 65 percent of millennials, the younger fans, want to watch the World Cup more often. “And the fact that it happens so often does not make the tournament any less popular. It is the quality that gives it prestige. And that quality is high in the World Cup. We have to listen to the youth, because they are the future.”

Too heavy, too much

De Jong doesn’t think so. “Maybe I think it’s too traditional, but it results in football exaggeration. Soon you’ll have the first month of the Women’s World Cup and then the Men’s World Cup every two years. Another World Cup, you’ll hear.”

CONMEBOL believes the same as UEFA. There, too, they fear that their competition will be affected and that players who play a major final almost every season (because the European Championships and the Copa America are also there every four years) will be heavily taxed.

UEFA has also added the Nations League to the national team’s agenda for a few years, which has already increased the number of international matches. Infantino rejects the criticism. “There will be a mandatory three-week break after the World Cup. And only if you win the World Cup and the European Championships do you have to play more matches. On average, there will be no more matches.” 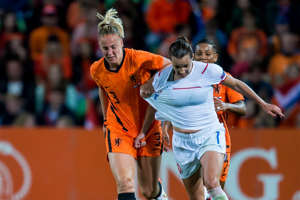 Like the KNVB, Dutch clubs are strongly against the FIFA plan. According to director Yan de Jong of Eredivisie CV, it simply doesn’t fit. “Clubs lose their players for an additional 15 to 20 days. This leads to scheduling problems.” He also fears that the clubs will lose that in terms of media attention from the major leagues.

FIFA President Infantino said that the majority of the 211 member states support a doubling of the number of World Cup tournaments. However, he does not yet dare to hold an official vote on it. Big football nations should be persuaded more, is his idea.

All Guilds received a 700-page report with all the details at the last FIFA Conference. “Nice for Christmas,” KNVB’s De Jong says sarcastically. “But it would have been better for the operation if we had received the reports two weeks in advance so that we could study them before the meeting.”

Knives are sharpened. Because even if no one spoke officially of the boycott, this danger hung like the sword of Damocles over the plans.

And a World Cup without superpowers like Germany, Italy, Argentina, Brazil and – come on – Holland: this is not a World Cup.

By Halle Clarke 7 hours ago

By Halle Clarke 15 hours ago

Baseball is increasingly dealing with pitch delays with PitchCom

By Halle Clarke 23 hours ago