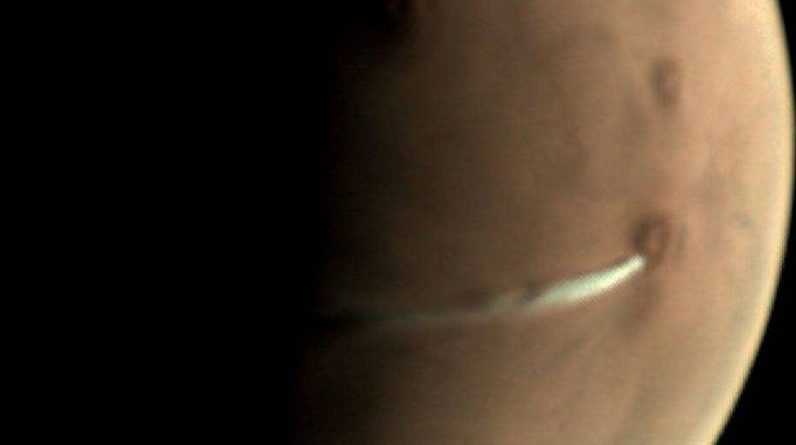 Scientists have solved a mystery that they have been puzzling for some time. On Mars, a uniformly elongated cloud can be seen extending for hundreds of kilometers and then disappearing again within a few hours. Thanks to the European Mars Express probe, we now finally know what’s going on.

White cloud hangs near Arsia Mons volcano, south of the equator. Mars Express has seen the veil grow and fade daily throughout the spring and summer and bring back great visuals. Scientists have also obtained data from other Mars explorers.

The cloud was at its largest, about 1,800 kilometers in length and 150 kilometers in diameter. It turned out to be a urographic cloud – the largest on the red planet – which means it was created by winds propelled by Arsia Mons. The moist air then condenses at cooler altitudes.

The European Space Agency (ESA) reported that the cloud has a fast daily cycle that repeats every morning for several months. It begins to grow on the western slope of the Arsia Mons before sunrise and then spreads west for two and a half hours, growing at a remarkable speed at an altitude of 45 kilometers, at a speed of more than 600 kilometers per hour.

Then the cloud stops expanding, moves away from its original location, and is drawn to the west by the higher altitude winds. It evaporates again late in the morning as the air warms with sunrise.

The results are published in the Journal of Geophysical Research.

READ  The largest asteroid of the year skates on Earth

If we ever travel to Mars, it would be thanks to this 2.4 billion jeep (+)

Do you land on mars Seven minutes of horror

The Marslander Perseverance has successfully landed on Mars