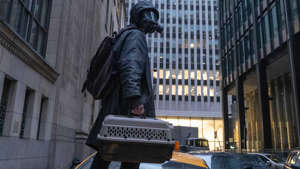 © Provided by SerieTotaal
“Y: The Last Man” already has an end in sight


Elisa Clark, presenter of the upcoming TV comedy show Y: The last man, already knows how many seasons the series should last. It is really not long at all.

Brian K. Vaughan and Pia Guerra’s comedy follows Yorick Brown. He is the sole survivor of a mysterious disease that kills every mammal on Earth with at least the Y chromosome. He lives with his Ampersand monkey.

During an interview, Clark said that she believes that Five or six seasons He’ll need to properly portray the 60-issue comedy. But five seasons is what she aspires to.

“Without wanting to give anything up, comedy is a great model to work with. But the series will have its own ups and downs. In general, I think television is at its strongest when you have about five seasons,” The viewer said.

The first season begins with the Great Cataclysm and the weeks that followed in the United States. Those results look very interesting, and Clarke says there will be a broader look after the first season. There are also more jumps in time and it becomes more of a series of genre as things progress.

[more=b7hn8qvpm8k1]Read also: The stalking is on in the ‘Y: The Last Man’ trailer[/more]

[more=ko471cj8ycry]Read also: Another great trailer for Y: The Last Man[/more]