As club football takes a breather for the international break, a penny for the thoughts of beleaguered Manchester United boss Ole Gunnar Solskjaer? The Norwegian had a spring in his step as the Premier League campaign began in August. The Red Devils opened the season with a 5-1 trouncing of rivals Leeds United on the opening day, and that was soon followed by the announcement that Cristiano Ronaldo would be returning to the club where he first became a superstar.

But things have gone awry in September and October. United have looked toothless in several games, and they have been embarrassed by defeats to teams like Young Boys in the Champions League, West Ham in the EFL Cup, and Aston Villa in the Premier League. It’s undeniable that United’s squad is loaded with talent – Ronaldo, Edison Cavani, Paul Pogba, Bruno Fernandes, Raphael Varane – so the buck, in the eyes of the fans, stops with Solskjaer.

The irony, perhaps, is that United’s position (on paper) does not look so bad. The team sits 4th in the Premier League table, just two points off leaders Chelsea. The UK sportsbook 888 Sport give United a 33/2 chance of winning the Premier League (not far off where they were at the start of the season) and also quotes them as odds-on to secure a Top 4 spot. That suggests nobody believes the wheels have come off entirely.

But here’s the rub: The worry over United is that they have scraped into 4th position – and kept in touch in their Champions League campaign – without playing any truly strong teams. The teams above them in the Premier League – Chelsea, Liverpool, Man City – have all played each other at least once. United, put simply, had an easy start to the season, and they are still behind their rivals.

That’s going to change over the coming the autumn, however. United face a daunting run of fixtures that could have repercussions for the season, and Solskjaer’s future. United’s upcoming Premier League games are as follows: Leicester City (Away, 16th October), Liverpool (Home, 24th October), Tottenham Hotspur (Away, 30th October), Manchester City (Home, 6th November). Those fixtures sandwich two crucial games against Atalanta in the Champions League.

It’s clear that those six games are daunting. Both Manchester City and Liverpool are considered among Europe’s strongest teams, and away trips to Leicester and Tottenham are not the kind of test an under pressure manager would like. Solskjaer, who signed a new contract in July, might find that his tenure will come to an end if things don’t go United’s way.

However, might we argue that there is some hope for the United boss in these stern tests? You see, much of the frustration among United fans stems from the fact United seem to struggle against weaker teams; those clubs who set up to defend deep against United’s attacking talent. United have had much more success against teams that attack them – see the Leeds result for evidence. The likes of Man City and Liverpool will come at United with all guns blazing, as will Atalanta in the Champions League, so that may play into Solskjaer’s hands. 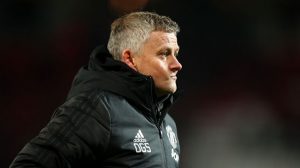 Fans seem to have mixed feelings about Solskjaer. The job he has done at the club in terms of revitalising the squad has been excellent. And, you can point to clear progression in terms of points and finishing position in the Premier League. But the Norwegian cannot afford to oversee any regression. This period coming after the international break might be crucial in determining whether he will continue as boss, or whether he goes the same way as David Moyes, Louis Van Gaal and Jose Mourinho.

Wimbledon is allowed to be completely full, Wembley is not for the semi-finals and finals

Will the 17-year-old American student be the successor to Usain Bolt?