Wednesday 25 May, 19:05
Transport and Transportation BVLD

Barneveld Bright colors, neon letters, a jukebox and a picture of Elvis Presley: Walking into Route 106, you can imagine yourself in the United States in the 1950s. Rob Wing and his daughter Lisa are in the background at this striking gas station in Bournevelds Scoutenstrat.

‘I got stuck in the fifties and sixties,’ says Rob Wink with a smile at the 106th Atmospheric Store. ‘The era of freedom and tolerance. Plus, I’m always been interested in American cars and motorcycles. ‘

Daughter Lisa was born with a passion for her father’s retro style, and she drives an American car herself. Together with two other sisters, she and Robb set out on a trip to the United States a few years ago, riding (part of) the historic Route 66. Rob: ‘When we got there, we were the only ones in the area. It gave a tremendous sense of freedom, and sometimes you will miss it in the Netherlands.

Decide for yourself When the previous operator of the gas station in Schoutenstraat decided to stop, Rob saw the opportunity to create his own retro America in Bourneveld. Although he and Lisa had no experience at gas stations, they consciously decided to do it all themselves.

‘Since we are not integrated with the existing formula we can decide and implement everything ourselves. We like to do things differently – in terms of classification, but above all in terms of decor. ‘

Mini Museum After being renovated three months later, the gas station is now complete. In addition to the ‘regular’ petrol and diesel, Euro 100+ fuels come out of the pump, especially on vintage cars and older motorcycles, and the entire store is immersed in a rock and roll theme.

Every object has a story, says Rob. It will become a kind of mini museum. We think it’s important that people are welcomed here and come out with a smile. ‘ According to Lisa, it has worked best so far: ‘We only get positive reactions.’ 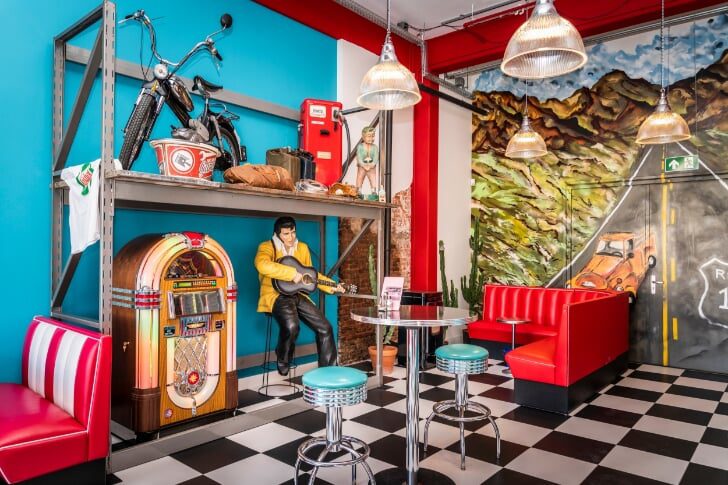 Cooperation between father and daughter is also running smoothly at present. Rob: ‘We give each other space, we have our own thing; Lisa runs the shop and I mainly handle fuel. It works well. ‘

Brought to you by Route 106