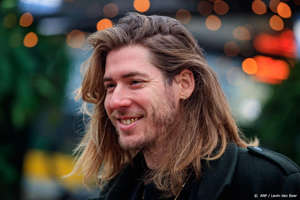 NPO 3FM DJ tells ANP that Frank van der Lende (33) wants to use his platform to raise awareness among the people. “I don’t want to be teased on the radio.” He has been learning more about the climate problem for the past three years. He therefore thinks it is important to raise money for the conservation and restoration of rainforests in South America, for which money is being raised this year with intense demand.

Along with Sander Hoogendoorn, Jorien Renkema and Rob Janssen, he was locked up at the Glass House in Amersford on Saturday morning. Listeners can request music in exchange for money. DJs will be collecting money at home until 5pm on Fridays.

He has always been aware of the climate problem, says Van der Lende, but it has only really worked in recent years. “For example, I rarely ate vegetables. But now a lot more. As you get older, I think.” He is not a ‘monk’ in terms of lifestyle, he insists. “I sometimes eat a piece of meat and have a petrol car. But I often go by train because I can separate most of my waste and eat vegetarian food.”

This is also due to his colleague Eva Goreman who hosted the afternoon show on the channel. “She’s already a vegetarian, and she’s very involved in it. You spend a lot of time together, so she let me know more about it.” Van der Lende once sees not eating meat. “But I want a fish,” he laughs.

See also  The white savior complex and journey: how imperialism arises in it

So he is more aware of global warming, he says. “This is a comprehensive problem, you can build a radio for many months. I think this is something I was already working on, anyway my generation and especially the generation after us.” He insists that our country will be flooded if we do nothing.

That is why he believes it is so important to fight deforestation. “It allows the earth to cool again.” That is also the reason why there is so much stove in the glass house. He says it was even 37 degrees at one point. “By dancing together, we can let it cool back home to show that we’re doing it together.” Because he says we must save the earth together. “I hope we can send Earth to a little Frank one day.”